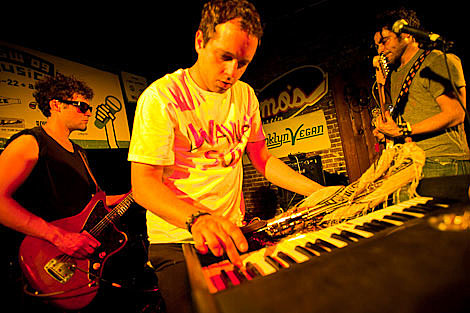 Psychedelic Horseshit will play on Saturday (7/23) at Death By Audio the day before they open for Swirlies at the free Beekman Beer Garden show. PH also play DC with Swirlies who will be on a four-date tour.

DeGreaser, Lame Drivers and Tyme Crisis are also on the Death By Audio show. Tyme Crisis, who will be making their debut performance at the Brooklyn show, are Henry Hynes of Home Blitz and Owen Kline. The venue doesn't list a special guest, but the Facebook invite does say "Perhaps also secret special guest band TBA." That's not a very strong statement, but it's probably worth noting that Psychedelic Horseshit's good friends Times New Viking will be playing a free show in Prospect Park earlier that same evening with The Feelies and Real Estate. Swirlies, play an afternoon show in Philly that day, so I guess they're not out of the realm of possibilities either.