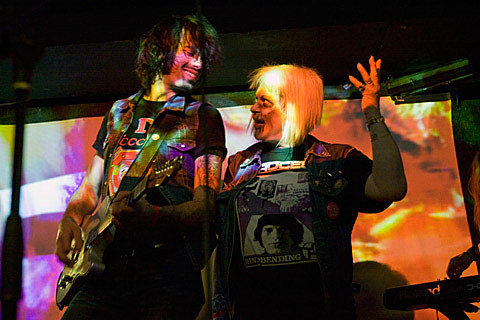 Psychic TV will perform "Live In Thee Wierd" at Home Sweet Home (131 Chrystie St) TONIGHT (8/17), a rare show that will see Genesis team with Kevin Hufnagel (!) and Martial Canterel (!) to perform "classic trax from the albums Force the Hand of Chance (1982), Dreams Less Sweet (1983), A Pagan Day (1984), and Allegory & Self (1988)" at Midnight. $15 gets you in, more details are at the Facebook invite. Update: the Facebook event is dead or private and there's no mention of the show on Wierd's website, but we did confirm that this show tonight is Genesis acoustic (not the full band).

Psychic TV (the full band) will play their annual end of year show at Europa, most likely on December 15th according to Genesis. Update: Tickets are on sale.

In related news, Kevin Hufnagel (Dysrhythmia, Gorguts) will team with Mick Barr (Orthrelm, Krallice) and Andrew Hock (Castevet) to play a rare solo guitar show on 8/29 at Zebulon. The show is FREE with suggested donation, and kicks off at 9PM. Mick Barr will release his new LP Coiled Malescence via Safety Meeting Records. Preorder it now.