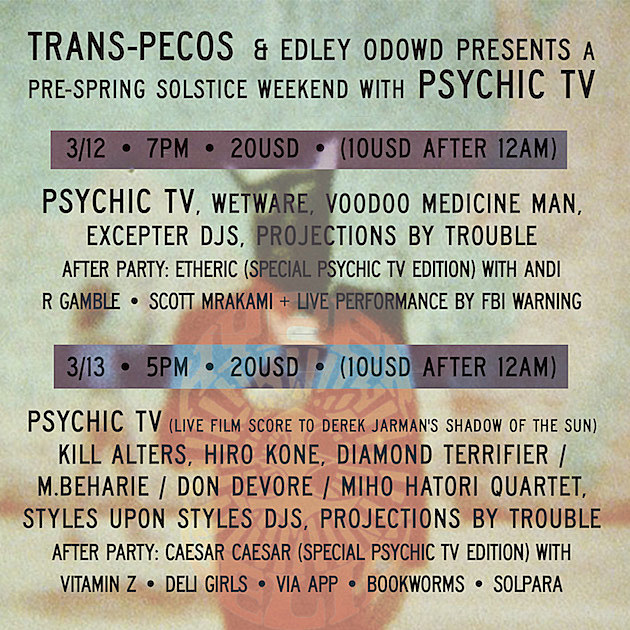 Psychic TV's two-night celebration at Trans-Pecos back in January got squashed by Winter Storm Jonas, but they've regrouped and have rescheduled it for March. Calling it "A Pre Sping Solstice Weekend with PSYCHIC TV" it goes down March 12 & 13 at Trans-Pecos. Tickets (both single day tickets and two-day passes) are on sale now.

In addition to PTV's set, the 3/12 date also features Wetware, Voodoo Medicine Man, Excepter DJs and projections by Trouble, with a late-night afterparty edition of "Etheric," featuring a live performance by FBI Warning, plus DJ sets by Andi, R Gamble and Scott Murakami.

The 3/13 show will feature Psychic TV playing a live film score to Derek Jarman's Shadow of the Sun, plus performances by Kill Alters, Hiro Kone, the Diamond Terrifier/M.Beharie/Don Devore/Miho Hatori Quartet, DJ Styles Upon Styles, and projections by Trouble. The afterparty for that show is a special edition of "CAESAR CAESAR" with Vitamin Z, Deli Girls, Via App, Bookworms, and Solpara.

As mentioned previously, the band's entire PTV-3 catalog was reissued digitally in January. Psychic TV will be on tour in Europe in May and June, and have other dates as well. All are listed below...