outside Public Assembly at BV-CMJ 2012 (more by Amanda Hatfield) 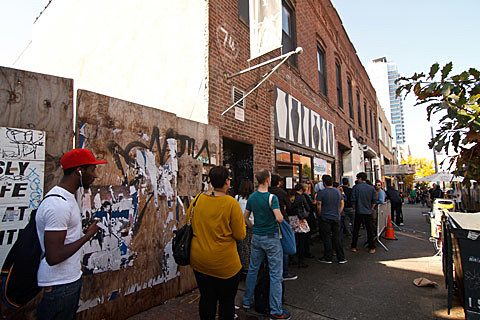 North 6th Williamsburg 2-stage venue Public Assembly (formerly Galapagos) recently closed their front room for renovations and are about to do the same in the back. That means there are literally only about two weeks of shows scheduled at the club at the moment. Krallice is playing the final show, and one of the others will be Bunker, which also may be Bunker's last at that venue according to to this message they sent out:

Four and a half years after founding The Bunker at subTonic, we moved the party to 70 North 6th Street (then called Galapagos) in July of 2007. We immediately found it to be the perfect space for the party, and have hosted the majority of our events there ever since. By our rough count, we've done about 150 parties in the back room over the past 6 years. Many of you have been there for most of those events, discovered every nook and cranny of the space, and know the bartenders and security staff by name.

As of now the front room is under renovations and is never to reopen as a music venue. The back room closes for a few months of renovation starting in mid-July. We're not really sure what shape it will take or if it will be appropriate for The Bunker when it reopens in September.

We wanted to have one more party to say a proper goodbye to the back room as we know it. The night will start with a deep, heady set from Borne (aka Scott Vizioli) and end with some late night haus from our good friend Atomly. Both of these guys have probably been to 140+ of the 150 events at Public Assembly. Shawn O'Sullivan, who has appeared at The Bunker solo and with his band Led Er Est, will treat us to one of his mindbending live sets. Resident DJs Bryan and Servito fill in the gaps. NikSound will of course be in the house. Goodbye for now, PA.

Meanwhile the Bunker will continue to throw parties at new Williamsburg club Output. Their current upcoming schedule and flyer for the Public Assembly show are below.

And what really caught our eye in that message above was the part about the front room never reopening for shows. That would definitely stink, especially since we've gotten kind of comfortable with the space as the home of our BrooklynVegan CMJ parties lately. Stay tuned for more info! 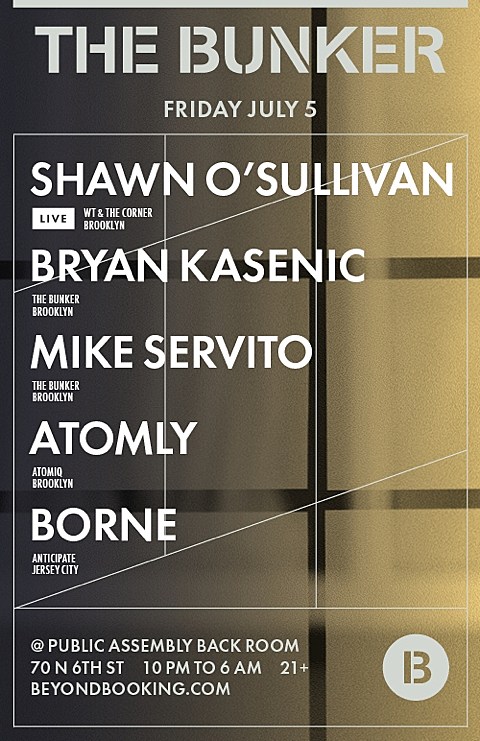