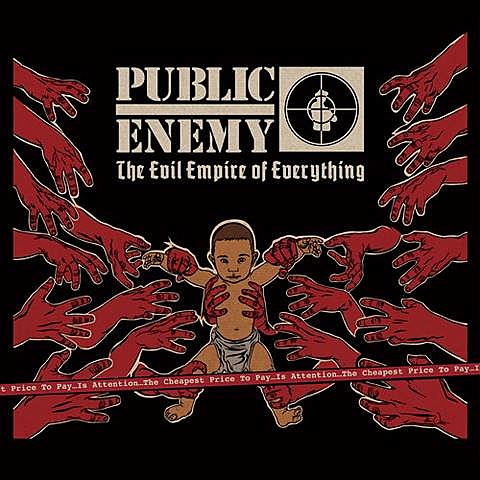 Public Enemy released Yo! Bum Rush the Show 25 years ago and show no signs of slowing down. In fact, 2012 has been a busy year for the hip hop legends, releasing two albums this year: Most of My Heroes Still Don't Appear on No Stamp in July and The Evil Empire of Everything this month. The cover art to the latter, which you can pick up at Amazon, is above and you can stream "Riotstarted" from it below which features Henry Rollins and Tom Morello.

Meanwhile, yesterday was the launch of the Hip Hop Gods tour that Public Enemy headline but also features X-Clan, Monie Love, Schoolly D, Leaders Of The New School and more. That tour hits NYC tonight at Irving Plaza. Tickets are still available but we have a few pairs to give away (in addition to what we're giving away on Facebook). Details on how to enter, song streams and a list of all tour dates, below...

======================
For a chance at winning a pair of tickets to see PUBLIC ENEMY AT IRVING PLAZA: either tweet something that includes both @BrooklynVegan AND "PUBLIC ENEMY" in the tweet, or send an email to BVCONTESTS@HOTMAIL.COM with the subject line "PUBLIC ENEMY". Include your first and last name in the email. We'll pick a winner at random and contact them with more details. If you enter by email, it will not be shared with anyone else. Good luck!
======================