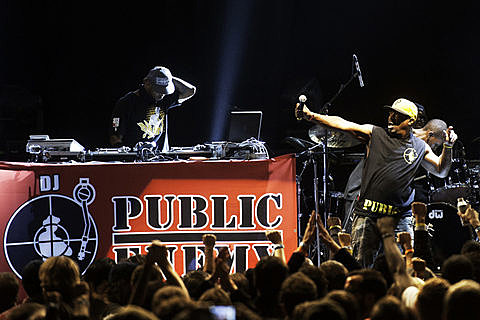 The initial tour will be filmed for future documentary, and subsequent tours will follow in 2013. The 3 hour concert, hosted by Chuck D, will move like a 1960s James Brown revue or Dick Clark Star Caravan making the concert a true once in a lifetime event.

It's like 1991 all over again, and political hip hop pioneers Public Enemy  have snagged some of the all-stars from the era for the tour from coast-to-coast. Look for the precision strikes tin late November and early December, with NYC getting the look at Irving Plaza on November 29. Tickets are on sale now.

Get your Africa medallions, "Get Used" jeans and Cazals ready, and catch the show at the tour dates listed below, alongside some classic videos from the era.

X Clan - Heed The Word Of The Brother

Xclan - Grand Verbalizer, What Time Is It

Son Of Bazerk - Change The Style

Monie Love - It's a Shame (My Sister)