"Was the pope a nazi? Yes the pope was a nazi" - Johnny Rotten 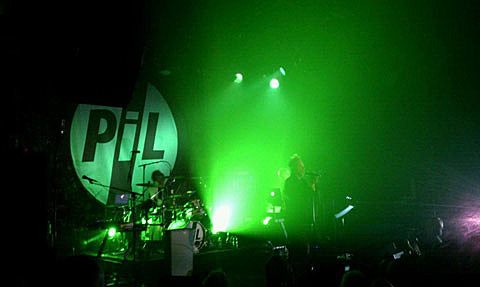 "Hey. We were dancing next to each other for basically the entire Public Image Ltd. (PIL) concert at the Music Hall of Williamsburg on Weds night. You were wearing a plaid dress and had blonde hair, I was wearing a fake leather jacket and a grey hoodie, with longer brown hair. I wanted to ask for you number but didn't want to piss the dude you were with off. If you want to hang out, listen to some records and talk about how amazing the show was, I am down." [Dancing to Public Image Limited - PIL at Music Hall of Williamsburg - m4w (Williamsburg)]

As that guy points out, it was an amazing 2 hour and 20 minute, tour-ending PiL show at Music Hall of Williamsburg in Brooklyn on Wednesday night (5/19). Johnny Rotten was on fire. The band was great, as was the venue. I can't wait to see the footage they were filming for the "forthcoming PiL documentary directed by Alex Mar and produced by Artists Public Domain".

Check out the pics and setlist from the night before at Terminal 5. And some videos from T5 below...