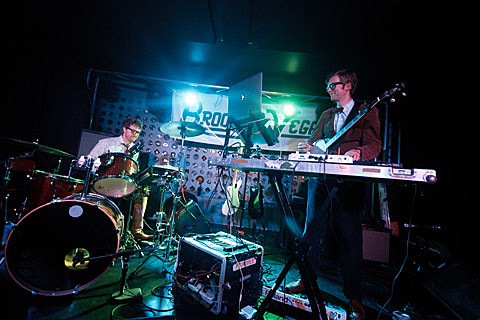 Public Service Broadcasting's Inform - Educate - Entertain was one of 2013 quirkier pleasures, mixing motorik grooves and dance rhythms (also: banjos) with found sound dialogue pulled from old educational films. Their live show takes it one step further, with projections to go along with every song, and all onstage banter coming via more old dialogue samples. It's kinda the complete package.

PSB have just released a special UK edition of their album that comes with a live DVD, and you can check out auto-oriented "Signal 30" from it below. The band were in NYC for CMJ (including being the capper to our epic 14-hour Saturday party), and will be back for a bigger North American tour in 2014 that will include a stop at SXSW (and Savannah Stopover) and another visit to NYC at Mercury Lounge on March 1. Tickets for the NYC show go on sale Friday (12/13) at noon with an AmEx presale starting Wednesday (12/11) at noon.

All dates are listed, plus the live video, below...