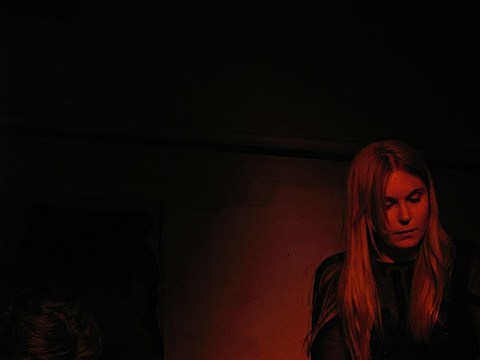 Danish one-woman industrial noise project Puce Mary released her newest album, Persona, earlier this year via Posh Isolation. If you're unfamiliar, you can get a taste from the bleak, distortion-covered and effect-laden track "Courses" below.

She also has a North American tour underway at the moment, and it includes three NYC dates. Most of the tour is with Ligature (ex-The Men, currently Warthog, Foreplay), although he'll be joining for only one of the NYC dates. The first is at ISSUE Project Room on December 5, where Puce Mary will be performing under her given name Frederikke Hoffmeier. That's part of the the three-day Swedish Energies 2014: EMS at 50 series which celebrates 50 years of Stockholm's Elektronmusikstudion (aka EMS) and "brings together a wide-ranging international lineup of visionary electronic and improvisational musicians spanning genres of sound and visual art." Here's the details on that one:

Tickets are on sale now and get you into all three days of the series, which also features cool acts like Stephen O'Malley of Sunn O))) and The Sons of God, among others.

That Palisades show is good all around, but if you're going don't miss Orden Mundial who will be here from Spain. Their speed-oriented attack provides an equally heavy contrast to Puce Mary's blasted-out industrial soundscapes. You can stream their newest LP below.

All Puce Mary dates are listed, along with that track stream and the Orden Mundial LP stream, below...