"On behalf of myself, Ben and Rob, I'd like to extend our heartfelt sympathy to anyone caught or hurt in the storms at Pukkelpop. Our show has been cancelled. Thanks to everyone who came to support us." - James Blake 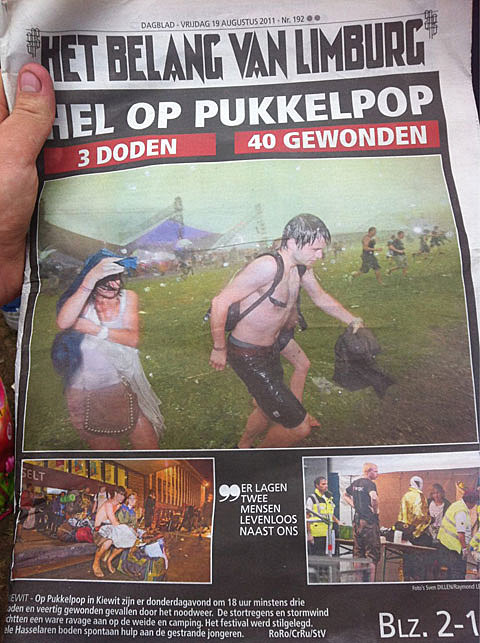 One of Europe's largest outdoor music festivals was canceled Friday after a stage collapsed during a violent storm in Belgium, killing five people and injuring 50, organizers said.

Belgian authorities confirmed Friday that the death toll has gone up.

"A fifth person has died," Andy Payne, spokesman for the nation's crisis center, told CNN. He said he did not know the circumstances surrounding the death.

The families of the victims have been contacted, she said. In addition, the festival is providing lodging, food and clothes for those concertgoers from abroad who have tickets to return home on Sunday.

The storm struck Thursday just hours after Pukkelpop kicked off. The scheduled three-day event was in Hasselt, east of Brussels.
Strong winds ripped up trees and smashed them into one of the festival's eight stages, Belga national press agency reported.
Belgian authorities are investigating the stage collapse, which struck those who had gathered to watch the Smith Westerns perform, Belga reported. [CNN]

The rest of the weekend is cancelled.