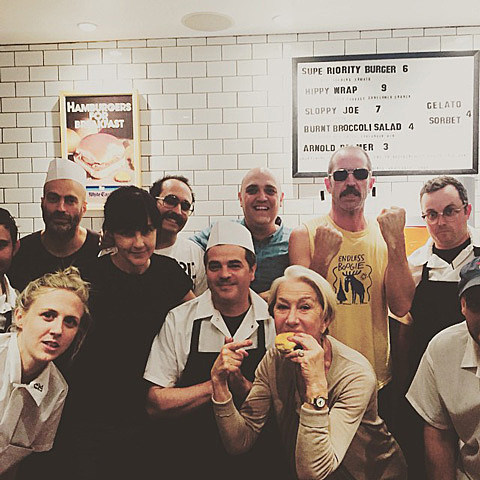 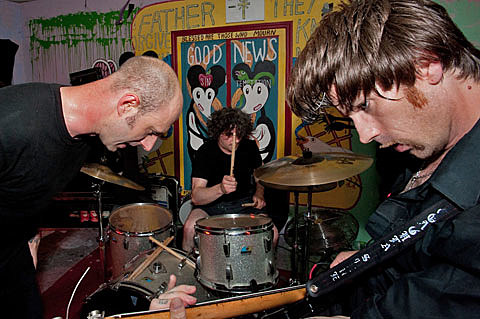 Brooks Headley has drummed in a bunch of punk bands, including Universal Order of Armageddon and Born Against. Lately, though, he's been known for his cullinary skills. He was Pastry Chef at Mario Batali's fanciest restaurant, Del Posto, where he won the James Beard Award for "Outstanding Pastry Chef" in 2013. Having been a vegetarian on the road with nothing to eat, he began playing around with a veggie burger recipe. He told Wondering Sound last year:

I've eaten a lot of veggie burgers, and they're usually pretty terrible. We were playing around [in the kitchen] one day a couple of years ago, and I ended up figuring out this [recipe], and tweaking it, and then feeding it to the people who worked in the kitchen -- just, "Hey, try this thing I'm making in the back." And we're talking about in the middle of service, you know? We have a five-minute break, so you'll throw some stuff together, throw it on some bread. It was funny, because when the meat cooks started to request veggie burgers, I knew I was onto something. The meat guys are the meat guys. They don't eat any fucking vegetable, period. It kind of developed that way. Now it's this fun thing I get to do every once in a while, if I can convince someone to let me take over their space. That [project] definitely is through music. I mean, I wouldn't be into veggie burgers if it wasn't for punk rock.

He opened the Superiority Burger pop-up on Eldridge St. last year which was an instant, line-forming hit. He left Del Post in order to open a permanent Superiority Burger location, at 430 East 9th St between 1st and A, which opened last night. Eater sent their three (omnivore) reviewers, all of which sang its praises. Says Robert Sietsema (himself formerly of NYC indie rock band Mofungo):

As the menu board excitedly proclaims, throwing punctuation to the winds, "Everything is vegetarian a lot is accidentally vegan just ask!" The namesake burger ($6) is quite a different animal than the one that first appeared on the scene two years ago. The present patty looks just like beef and has a nutty and grainy texture and savor. The bun is squishy and the toppings are limited to mustard and dill pickles, making it more Whataburger than White Castle. It is unqualifiedly delicious.

Not 100% up to full-speed, Superiority Burger is currently open from 6-10 PM.

Watch a video of Headley making "Vegan Crème Brûlée" with No Age, below...