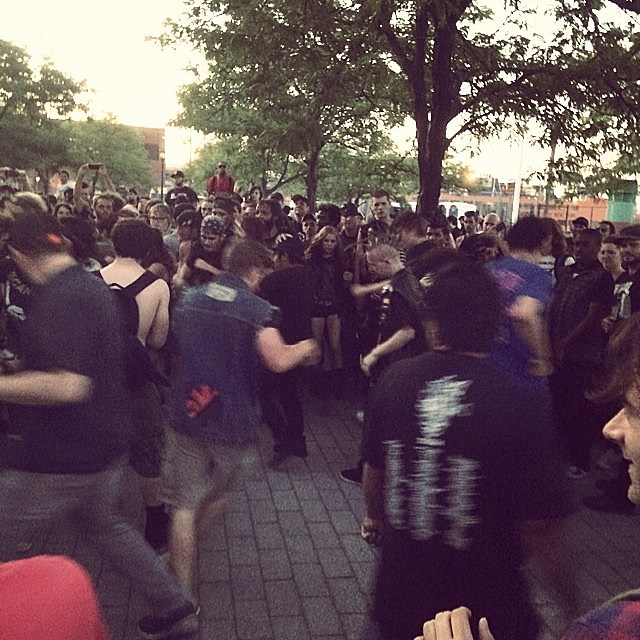 From the crustiest of street punks, to the tamest of ska fans -- all punk appetites were met at the 2014 Punk Island music festival.

Thousands of music fans flocked to the "Coast Guard" pier, a space located 100 yards from the ferry terminal in St. George, to take in the all-day festival. Starting at 11 a.m., 90 bands from across the country performed among seven stages.

All punk genres and variants were accounted for, including ska, grunge, hardcore (and all its subgenres), pop punk and early emo. It sounds overwhelming, but the stages were positioned close to one another and each served as its own genre hub. [Staten Island Advance]

Punk Island 2014 went down in Staten Island Saturday. Who were your highlights? Check out some videos from the free 'Make Music' event below.

Reagan Youth have had a busy two weeks touring the east coast, playing Punk Island, opening for the Dead Kennedys at Irving Plaza, and playing a show at Grand Victory in Brooklyn. Today, 6/27, tickets go on sale for another Brooklyn show, this time at Saint Vitus on 9/27 with fellow 70s punk band Angry Samoans who they also play at least one other show with that week: 9/26 at TT The Bear's in MA.

Meanwhile, speaking of Dead Kennedys, Jello Biafra and the Guantanamo School of Medicine's tour with the legendary Negative Approach (who played Punk Island in 2010) hits Highline Ballroom in NYC TONIGHT (6/27) with All Torn Up! (who played Punk Island this year, recently opened for Sheer Terror at Brooklyn Night Bazaar, and shared a bill with Reagan Youth at the Rock Shop).

Negative Approach and Jello is a pretty early show, so you might have time to head from there to see the first of two shows Infest is playing in NYC this weekend.

Speaking of Sheer Terror, they just dropped another new track from their forthcoming LP (their first in 18 years). You can listen to that with the Punk Island videos and dates below...

Infest - Why Be Something That You're Not? (Negative Approach Cover)