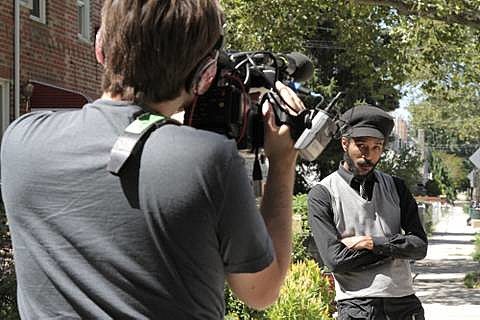 Film director Jesse Zook Mann and producer Evan Kleinman made a new documentary Punk Jews, centered around Jewish artists in NYC, and it will make its world premiere in the city it takes place in on December 11 at JCC Manhattan (334 Amsterdam Ave at 76th St). Tickets for the premiere are on sale now (there's an early show and a late show). The film description reads:

"Punk Jews" is an upcoming documentary film that follows an underground Jewish community expressing their identity in unconventional ways that challenge stereotypes and break down barriers. From Hassidic punk rockers to Yiddish street performers to African-American Jewish activists, "Punk Jews" shows an emerging movement in New York City of Jews asserting their Jewish identity, defying the norm, and doing so at any cost.

You can watch the trailer for Punk Jews along with the premiere flyer below. The premiere happens during Hanukkah and is one of many upcoming Hanukkah events in NYC.