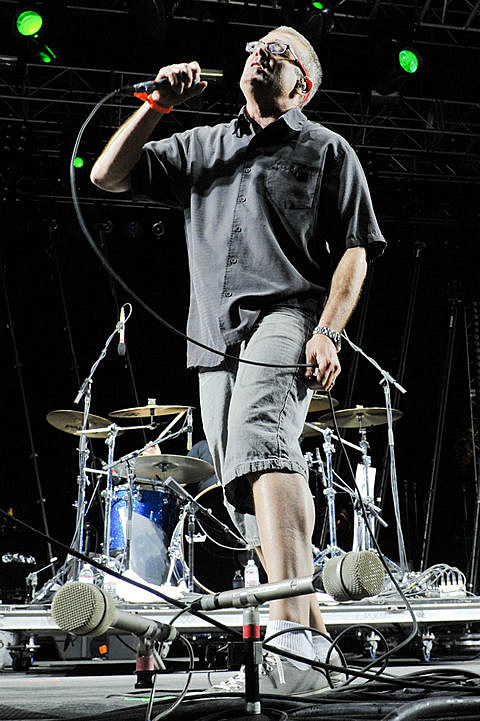 Much has been going on in the punk world lately, and in case you've missed out, here's a roundup of information on upcoming shows (mostly in NYC), and other related news. The big one is probably the inevitable news that Black Flag guitarist Greg Ginn sued FLAG, the other currently operating incarnation of Black Flag. You can catch the impostors when their tour hits NYC on Septemeber 19 at Irving Plaza (tickets).

FLAG, as you may know, also share members with another classic punk band Descendents, and both of those bands will be playing this year's Fun Fun Fun Fest, which goes down in Austin from November 8-10. Tickets for that festival are still available.

Meanwhile, in an interview with Under the Gun (via Exclaim), Descendents drummer/producer Bill Stevenson mentioned that the band are slowly, but surely working on a new record, which will be the followup to 2004's Cool to be You. Bill said:

[The record is] in the embryonic stages. I have my studio, The Blasting Room, Stephen [Egerton] lives in Tulsa, and he has a studio too. Milo [Aukerman] even has a real small recording apparatus in his basement. Karl [Alvarez] still lives by me.

So I went in a couple of weeks ago and recorded, so we got 11 songs done, [but] just the drums. We'll be passing those around, Stephen will be putting guitars on 'em, Karl will be putting bass on 'em, Milo will be singing on 'em. We'll get rolling but it's not gonna be like "Oh it'll be done in a month!" It's gonna take us several months.

Descendents have also recently been honored by some bands they've influenced. Pop punks Candy Hearts released a cover of "Nothing With You" on their new 7" (listen below), and FILTER Magazine recently released a free tribute album that features FIDLAR, Mike Watt + The Secondmissingmen, The Bronx, YACHT, TEEN, Good Riddance, and more.

Good Riddance, the '90s era Cali punks who reunited in 2012, will be playing their first NYC shows since reuniting, all of which will happen during this year's CMJ. They'll be playing both official Fat Wreck Chords (who put out the last Descendents record) showcases, including the one happening at Music Hall of Williamsburg on October 18 with The Flatliners, Western Addiction, and Brooklyn/NJ's Night Birds, whose new album, Born to Die in Suburbia, does a lot of justice to the sound bands like Descendents and Good Riddance helped create. That same lineup (minus The Flatliners) sets sail aboard a Rocks Off Cruise the next day (10/19). MHOW tickets are on AmEx presale now, and a general on-sale stars Friday (8/9) at noon. Rocks Off tickets go on sale Friday at noon.

Night Birds also have some dates with Zero Boys, including a NYC show on August 29 at Europa with Nuclear Santa Claust. Tickets for that show are still available.

Another good punk option in NYC happening much sooner (this weekend to be exact) is As discussed, Citizens Arrest (who once counted Ted Leo as a member), who play Brooklyn's Acheron on Saturday (8/10) (57 Waterbury St) with Enabler, Miscegenator, and Dead Serious. Tickets are still available.

NYC street punk vets The Casualties have some Northeast dates this September. None of them are in NYC, but they do have an Orange County show on 9/7 at Ma and Pa's, a Long Island show on 9/12 at Revolution, and two NJ shows: 9/13 at Stanhope House and 9/14 at Brighton Bar. All of their dates are listed below.

Another East Coast punk tour lands in the NYC-area this month when Protagonist and related project Teen Agers hit New Brunswick on August 13 at Court Tavern with Not The Bees and Lay the Blame on Luck, and Brooklyn on August 14 at Saint Vitus with Go Deep, Scarboro and Divided Heaven. Tickets for the Saint Vitus show are on sale now.

As you may already know, Kid Dynamite are breaking up (again), but not before playing This is Hardcore in Philly this week (8/8) and their free House of Vans show (8/15) in Brooklyn with Joyce Manor, Red Hare, and Swearin'. RSVP for that show is closed.

Joyce Manor also have other shows around the one at HoV, including another Brooklyn show happening on August 17 at Knitting Factory with Glocca Morra and Dogs On Acid (ex-Algernon Cadwallader). Tickets for the Knit show are still available.

Obviously these are only a few of the upcoming punk shows in NYC. What else?

Some streams and the list of Casualites dates, below...

Candy Hearts - "Nothing with You" (Descendents Cover)

Angry Samoans - Inside My Brain