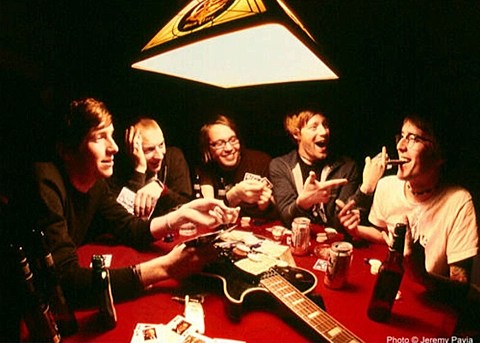 New York punks Marathon, whose lineup included two members that went on to form to Polar Bear Club (but both recently left that band), broke up back in 2006 after the release of their only full length (self-titled). However, after reissuing that album in 2013, the band have now announced two reunion shows in their home state. They happen in Brooklyn on February 28 and Rochester on March 1 (venues TBA) with No Trigger (who also recently became active again) and Fire When Ready (whose only album came out in 2005 and who also don't appear to have played live in a while). The shows also include No Way, Soul Control and Benny Beyond. Flyer and song streams below.

UPDATE: The Brooklyn date happens at Saint Vitus with Marathon, No Trigger, Fire When Ready, and No Way. Tickets go on sale Friday (1/24) at noon.

Marathon's made fans out of other punk bands in the area, including Banquets, who as discussed, play NYC on Thursday (1/23) at Saint Vitus with UnWed (mems. Hot Water Music/Small Brown Bike), Nuclear Santa Claust and Pagan Girls (tickets).

A much older New York punk band, No Redeeming Social Value, will celebrate their 25th anniversary with a show at Brooklyn's Grand Victory on March 29 with Yuppicide, Two Man Advantage, Last Call Brawl and DJ Spag. Tickets for that show are on sale now.

Meanwhile, The Dictators NYC (Dick Manitoba's current version of The Dictators) will celebrate sixty years of Handsome Dick Manitoba on Thursday (1/23) at Bowery Electric with Threats and The Bullys. Tickets for that show are on sale now.

Also at Bowery Electric is NYHC band Reagan Youth on Sunday (1/26) with The Memphis Morticians, Twin Guns, Emergency Break and Dust Angel. Tickets are on sale.

And one more Bowery Electric show is the one February 16, which is the NYC stop of Richie Ramone's (who drummed in the Ramones from '83-'87) 'Something In My Drink' tour. Also on the bill is The Waldos, Threads and The Weapons. Tickets for that show are on sale now. All dates on the tour are listed below.

In other NYC punk news, there's a benefit for the Transcore stage of Punk Island (which Aye Nako have played) at Grand Victory on Tuesday (1/21) with Little Waist, Penguin, Dirty Circle and The Whores (not to be confused with Whores). Tickets are on sale now and "100% of net proceeds will go to cover the costs of the Brooklyn Transcore Stage at the 2014 Punk Island Festival. "

Though this particular project is reggae, H.R. of punk legends Bad Brains will bring his band Dubb Agents to NYC for a show on February 21 at The Studio at Webster Hall with Rebelmatic, Radio Daze and Get Involved (mems Thursday/Judge/Glassjaw).

Another punk show goes down with I Am the Avalanche, The Swellers, Turnover and Bellwether on March 28 at Marlin Room at Webster Hall. Tickets for that show are on sale now.

Turnover are on many dates on the Diamond Youth / Turnstile tour, but not the NYC show which happens on 2/14 at Acheron (tickets).

A week later at the Acheron (2/21) is the previously discussed Iron Chic / Chumped show. Since we last spoke, Earworms dropped off that show and were replaced by Timeshares. Iron Chic also recently announced all dates for their their tour, which you can check out here. Tickets for the Acheron show are still available.

In other recent punk news, Paint It Black announced their first NYC show in years, and The Lawrence Arms and Against Me! are streaming their new albums.

Marathon flyer, streams and more below...

Fire When Ready - "The Right Hook" 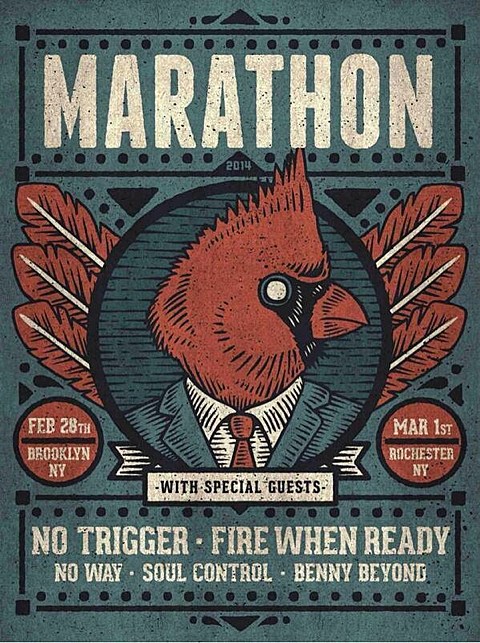