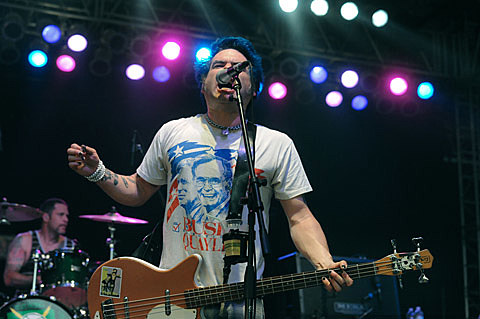 Cali skate punks NOFX have announced a US tour which will go down this fall and hit NYC on November 30 at Irving Plaza. Support at that show, and a few of the other Northeast dates, comes from The F.U.'s and Implants. Tickets for that show are currently on Citi Cardmember, Live Nation (password: "HOB20") and Music Geeks (password: "musicgeeks") presales, and the general on-sale begins Friday (9/13) at 10 AM. All tour dates are listed below.

As discussed, NOFX frontman Fat Mike's label Fat Wreck Chords are doing their official CMJ showcase at Music Hall of Williamsburg on October 18 with Good Riddance and Western Addiction reunions, plus sets from The Flatliners and Brooklyn/NJ surf punks Night Birds. That same lineup (minus The Flatlieners) goes on a Rocks Off Cruise (10/19) the next day. Tickets for both shows are still available.

You can also catch Western Addiction at a smaller, sweatier show when they play Acheron on October 20 with Eric Davidson's (of New Bomb Turks) band Livids and Brooklyn punks Weird Womb. Tickets for that show are on sale now. Western Addiction's only full length album was 2005's Cognicide, which you can stream on Spotify.

Another good punk show at Acheron is Iron Chic, RVIVR, Nude Beach, and Giant Peach on October 13. Tickets for that show are on sale now.

That happens after Nude Beach's tour which hits Mercury Lounge on September 20 with Suspicious Beasts and Honey (tickets).

Meanwhile, you can also catch Long Island's Iron Chic in NYC when they open for Kill Your Idols at Santos Party House on November 30, with Concrete Cross and Bad Side also on the bill. That's Kill Your Idols' second show at the venue after the previously discussed November 29 date with Crime In Stereo and Altered Boys. Tickets for both nights are still available.

Iron Chic have some hometown LI dates coming up too, including the No Fun Club (9/15) stop on the Screaming Females/Waxahatchee/Tenement tour this weekend. All Iron Chic dates are listed below.

Boston punk fans may be interested in knowing that Dropkick Murphys have announced their hometown St. Patrick's Day shows, which include five shows at House of Blues from March 13-16. Tickets for all five shows go on sale Saturday (9/14) at 10 AM.

Don't forget that The Mighty Mighty Bosstones are doing their Hometown Throwdown at the same venue in December.

As mentioned in our last punk roundup, The Casualties are doing some shows in Long Island and NJ this week. Since that post, they've also announced a show happening in Coney Island on Sunday (9/15) at Sideshows By The Seashore (1208 Surf Ave at the corner of Surf and W. 12th). Tickets for that show are on sale now.

Another punk show happening in Brooklyn this Sunday is Upstart Fest at Knitting Factory (9/15) with Koffin Fats, Turbo AC's, The Scandals, and more (tickets).

That same day at the East Village's Bowery Electric is the previously discussed Angry Samoans show with Last Call Brawl and Downtown Brown. Tickets for that show are still available.

Bowery Electric is also hosting the 'Carry On Band Series,' as part of the CBGB Festival, on October 10 (6 PM - 2 AM) with tons of punk legends like Cheetah Chrome, Lydia Lynch, RIchard Lloyd, Syl Sylvain, Lenny Kaye, The Waldos, Glen Matlock, Tuff Darts, Faith, Andy Shernoff and many more. Tickets for that are on sale now.

You can find more punk shows HERE. What else?