"I appreciate the irony of the DIY site punkcast being taken down by arguably the originator of punk style using entirely establishment means." - Joly MacFie 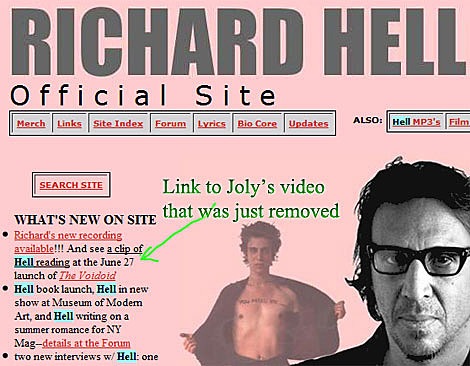 As you may know it contains around 700 clips, mainly of the NYC music scene, but also of local internet related events including public hearings of the NYC Council's Committee on Technology in Government. It has had approaching 3 million views.

YouTube has a policy of suspending accounts of repeat copyright offenders and I just got my 3rd strike.

Almost laughably it was a DMCA takedown from Richard Hell over some footage I shot of him talking about his next record at a book signing a couple of weeks back. I plonked a mic in front of him and told him I was shooting for webcast, The clip was of conversation as I waited for him to start reading. He didn't say anything in particular beyond what went out in his recent press release about the record i.e. it's redubbed version of an old record that he wasn't happy with. I posted it with a link to his pr. Thought I was being helpful. I'd earlier posted a similar clip of him reading from his new book, and his co-author even posted it on his blog.

I've filed a counter-notice and, if and when the account get's re-instated I'll remove the clip..." [Joly MacFie of Punkcast.com]

Joly may not even realize (well he will after reading this) that the clip (or one of the related ones) was even posted on Richard Hell's official site...well IT WAS until this morning when it was removed. It is of course possible that Richard himself didn't do this, but someone at his label, publisher, etc... A peak at his Wiki page reveals associations with "Sire, Warner Bros., Red Star, Matador, and Rhino".

The record that Richard describes in the disputed video is his remake of 1982's Destiny Street ("originally released in 1982 on Red Star Records, and was reissued in 1995 by Razor & Tie"). The album, Destiny Street Repaired (which is public knowledge), will feature new vocal tracks and music that includes guitar work from Bill Frisell, Marc Ribot and founding Voidoid member Ivan Julian. The record will come out on September 1st through Insound (the online store that is also the label in this case).

The rest of the note from Punkcast, (UPDATE: ) AND a letter Richard Hell wrote to Joly in response, below... 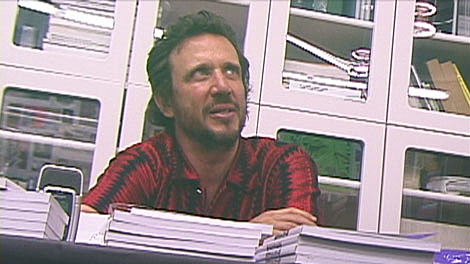 ...I'd had two previous DMCA's recently, collateral damage in YouTube's ongoing war with Warner's and Viacom, both on song publishing. Hot Stuff - Von Iva - Warners Let's Make Love and Listen to Death From Above - Cansei der sei Sexy - Viacom I didn't contest these, altho I did have casual permission from the band who are the composers on the latter.

On the second occasion YT made me check off that I understood copyright.

In one other case where infringement was found through YouTube audio matching - a clip of K8 Hardy karaokeing Joan Armatrading - http://www.punkcast.com/1132/ - the record label allowed it to sit while they collected revenue from ads displayed on the page.

I have, in the past, removed clips by request of musicians not happy with their performance as a matter of course. Normally they just contact me through YouTube and ask.

I appreciate the irony of the DIY site punkcast being taken down by arguably the originator of punk style using entirely establishment means.

More than anything this has to be extremely frustrating for Joly who spent countless hours building that account up. We here at BrooklynVegan often embed those videos, and anyone who's gone to more than one live show in NYC or NJ over the years definitely knows Joly is always out there working hard. Hopefully YouTube will just realize their mistake and put the videos back up, or maybe YouTube is not the right site for a collection like that.

I aplogize for taking action that got your YouTube account suspended. I had no idea that when we objected to that one clip it would have that result. I would have tried harder to contact you (instead of YouTube) about the clip if I'd realized that. I think you perform a great service with your Punkcast site and the record of concerts etc. you make. I just thought that clip where I'm talking about the new CD was redundent and unnecessary and confusing (and low quality--hard to hear). I was glad the other one (of me reading, etc., at the book launch) was up--we even linked to it from my site. I just wish you would ask me before you post clips of me. Anyway, if there's anything I can do to support your reinstatement at YouTube, I'd be happy to do it. Please let me know.