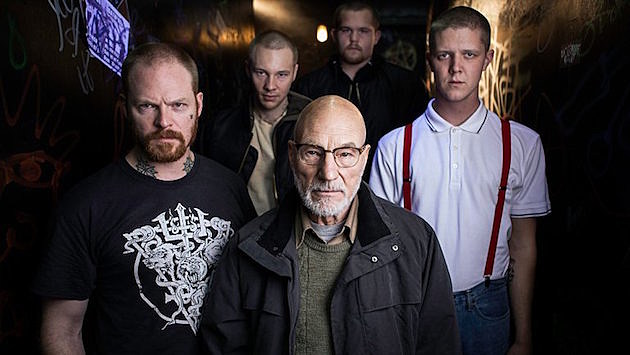 A trailer for the new film Green Room just dropped, and it might be of particular interest to music fans. Starring Brooklyn resident Patrick Stewart as a scary-looking man in a scary-looking music venue, it's a thriller about a punk band (played by Anton Yelchin, Imogen Poots, Arrested Development's Alia Shawkat and others) that ends up trapped in the club's backstage green room after seeing something they shouldn't, facing off against Sir Patrick and his gang of neo-nazis.

The film premiered at Cannes last year and will screen at Sundance this weekend. It's the writer/director Jeremy Saulnier's followup to 2014s Blue Ruin, which was a brutal, tense, excellent tale of small-town revenge. This trailer makes this one look, well, brutal, tense, and excellent. (It's also Enterprise Crew Vs Enterprise Crew as Yelchin plays Chekov in the current Star Trek films, and Stewart is of course known Earl Grey-loving Jean-Luc Picard in The Next Generation.) Green Room gets a theatrical release on May 13.

Check out that trailer below.