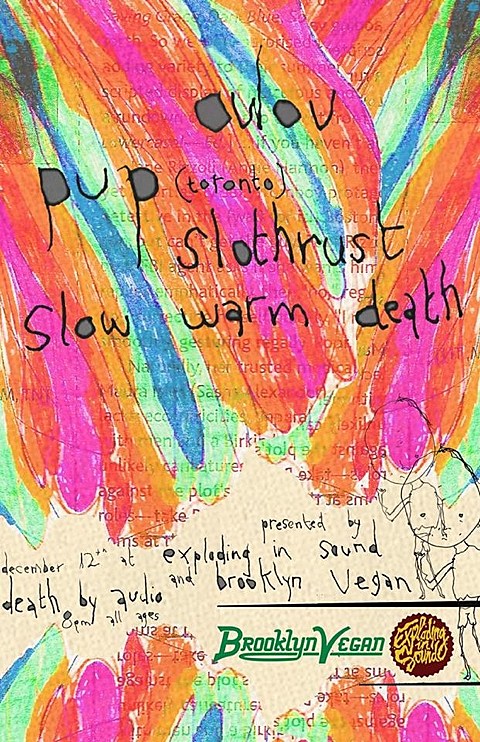 We at BrooklynVegan are proud to announce that we're teaming up with our friends at Exploding In Sound Records to present a punky, all ages holiday show on December 12 at Death by Audio. Opening the night will be Brooklyn's raging garage punks Slow Warm Death (whose singer John Galm used to front Snowing), and they'll be followed by sludgy blues rockers Slothrust. After them is the rippin' Toronto punks PUP, and finally CT's grungy Ovlov. Admission for this show is $8 and doors are at 8 PM. Hope to see you there!

UPDATE: Ovlov dropped off. Chumped and Alarms & Controls were added!

PUP's self-titled debut LP came out in Canada earlier this year, and the whole thing can be streamed, along with the rest of their tour dates below.

Ovlov also have other dates coming up, including two in their home state, and you can check those out, along with a stream of their album Am below. Slothrust's Feel Your Pain LP and Slow Warm Death's self-titled LP can be streamed below too.

A couple weeks after this one, BV is doing another punky all ages holiday show with The Front Bottoms at Shea Stadium, which is now sold out.

All lists of dates and streams below...