So So Glos Fans (more by Zach Stern) 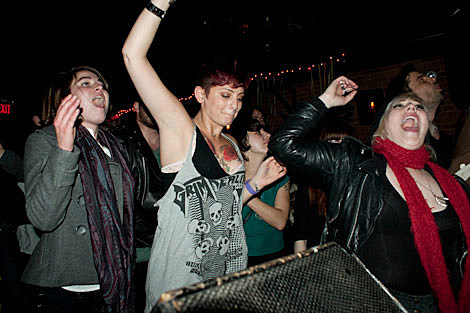 The lineup has been announced for this year's SUNY Purchase Fall Fest, an annual one-day, students-only festival which will take place on November 5th in the SUNY Purchase Student Center (The Stood). Fall Fest '10 (aka Halloween 2) will be headlined by Raekwon, and features a very varied lineup of other acts including Death who just announced a NEW album...

BASEMENT OF WHAT WAS ONCE KNOWN AS GROOVESVILLE STUDIOS - DETROIT, MI - May 7th, 2010

"After searching for almost eight hours, I removed a box with a Master in it and vaguely saw some big red letters on the box below it. I shinned the light on this box to clearly see the writing in big red letters DEATH. I screamed with excitement DEATH!!, DEATH!!, DEATH!! Everyone in the building starting to scream and wildly cheer and applause. Upon seeing those tapes, it brought it all back, David had written those big red letters on the tape. Engineer Jim Vitti had jokingly drew a skull and crossbones on the box after the name to which David did not like telling him "We are not that kind of Death". I was full of emotion, I cried. We were all elated, Jacque was elated, I called up Dannis who was in Vermont and he began to joyfully celebrate. I thought about David. If David were here with us all that has happened to Death up to this point would pale in comparison to what we found today. The tapes were right where Brian said they were sitting there awaiting us for 34 years." - Bobby Hackney

Spiritual, Mental, Physical is the new Death CD/LP and it will be released 01/25/11.

The SUNY show is Death's only at the moment.

The So So Glos will also be performing at SUNY, and are about to embark on a Five Borough NYC tour to celebrate the release of their new EP, Low Back Chain Shift, which came out Tuesday, October 12. The NYC tour happens to take place during CMJ, kicks off in Staten Island, includes a Queens BBQ with Patrick Stickles of Titus Andronicus, and a showcase at Pianos...

All dates and lineups are below.

Omar Souleyman will be performing at SUNY as the concluding date on his current tour, which also includes a November 2nd show at MHOW. Updated dates below.

Fucked Up is also returning to Purchase after getting their set cut short by the police at their 2008 Culture Shock Performance.

Full Purchase lineup, videos, and other tour dates below...

--
The So So Glos Paper Magazine Tour Diary