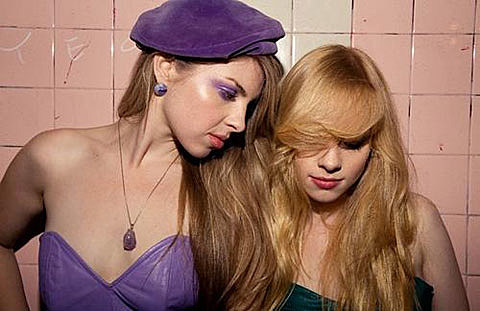 The "special guest" playing Pianos Friday night with Selebrities is Puro Instinct whose tour with John Maus just brought them to both Glasslands and Mercury Lounge. Pics from Mercury Lounge are on the way, and we already talked about Glasslands (though briefly). If you missed it, Bill wrote:

" I caught [John Maus and Puro Instinct[ at Glasslands. Maus' show, which shouldn't work, does thanks to his dedication and intensity. A little goes a long way, though. (I really like the new album, I should say.) Puro Instict can really sing and play... better songs will come with time. They're young."

The Pianos show is a benefit for human trafficking survivors and advanced tickets are on sale. Slowdance, Yvette, Care Bears on Fire (even younger than Puro Instinct) and Blissed Out DJs are also on the bill.

Updated Puro Instinct tour dates, and a video they posted with a current Kickstarter campaign they have going, below...