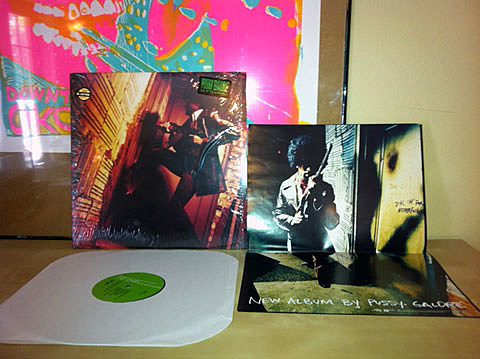 The band issued this statement:

Formed in 1985 by Jon Spencer and Julie Cafritz in Washington DC, Pussy Galore drew upon the bloated hardcore scene, totally rejecting the same while embracing 60's garage punk and R'n'B, industrial noise acts like Einsturzende Neubauten, and plenty of bad vibes and badder attitude. After a relocation to New York City in '86, the band quickly rose to prominence and infamy. Sold-out concerts and record releases were celebrated and debated in the pages of the Village Voice, Vanity Fair, and Art Forum. Pussy Galore toured across North America and throughout Europe, even making it to Japan before the band finally imploded.

Now this seminal and influential punk band's catalog is back in print, many of it available as digital download for the first time ever. Each release has been remastered under the supervision of Jon Spencer himself, vinyl masters are cut directly from the original tapes, all-analog. The classic 1987 album, 'Right Now', is available now on vinyl through Shove. This, along with 1988's 'SugarShit Sharp' EP and 1989's 'Dial M For Motherfucker' LP are available for download. Vinyl of SSS and Dial M will follow shortly and, as a special added bonus, a limited edition vinyl re-press of the original Pussy Galore debut 7" record, the' Feel Good About Your Body' EP, will be available for Record Store Day, also through Shove. America, get ready to feel good again!

On December 23rd of last year, Pussy Galore played an unannounced 15 song, 30 minute set at Maxwell's to a packed house, as part of Yo La Tengo's annual Hanukkah festival benefit. This one off 'secret' show would serve notice that one of New York City's great bands still has meaning for today. There are no further shows planned at this time.