Masha and Nadya of Pussy Riot on 'Colbert' 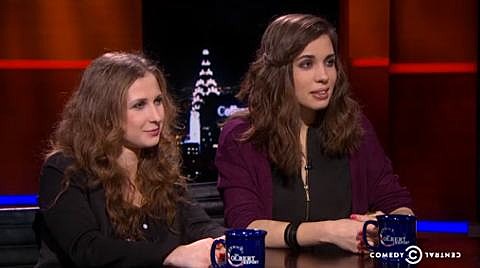 Pussy Riot members Nadezhda Tolokonnikova and Maria Alyokhina are currently in New York and will be at tonight's Amnesty International benefit (2/5) at Barclays Center. While here, they appeared on last night's episode of The Colbert Report for an interview. Masha and Nadya, in good spirits and in front of an audience fully on their side, talked via a translator about Vladimir Putin's "bright future" for Russia, kissing female cops, their release from Russian prison, and why they gave themselves an English name. "We wanted to let English people enjoy themselves," said Nadya. When Colbert asked if there was a Russian word for it, Masha replied, "There are lots of words in Russia." You can watch the whole interview below.

Tickets are still available to tonight's Amnesty International benefit with Flaming Lips, Madonna, Lauryn Hill, Tegan & Sara, Cold War Kids, Cake, and others. Pussy Riot will also be at the Voice Project Reception Thursday afternoon (2/6) at The Spotted Pig and tickets (price includes cocktails and hors d' oeuvres) are still available for that too.