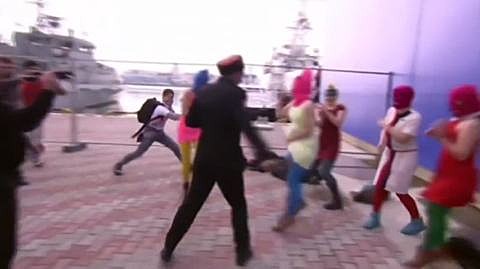 Pussy Riot may be free, but the masked members of the Russian feminist punks have had a tough time of it while protesting during the Winter Olympics in Sochi. Earlier this week, former (current?) members Masha Alyokhina and Nadya Tolokonnikov (who were in NYC not long ago) were arrested and detained, and now comes disturbing footage of Pussy Riot being pepper sprayed and whipped by Cossacks while trying to film a video:

An Associated Press video showed the Cossacks advancing on the five women and one man with whips, knocking them down and striking them. The performers had just been shown gathering quickly at an outdoor plaza in Sochi, about 20 miles from the Olympic Park, taking off coats, putting on their ski masks and preparing to perform when the Cossacks attacked.

The Cossacks roughly pulled off the masks and flicked their whips at the group. When the group escaped they tweeted what had happened, providing details and photos. They had been preparing to make a video of a new protest song, "Putin will teach you how to love your Motherland," when the Cossacks appeared and set upon them. - [Washington Post]

If unfamiliar with The Cossacks, the Washington Post story describes them:

The Cossacks, descended from czarist-era horsemen who patrolled the borders of the Russian empire, are remembered historically for leading pogroms against Jews. Today they are socially conservative and ardent supporters of the Russian Orthodox Church. Recently, they have been revived as a sort of volunteer citizen patrol, and about 800 of them have supplemented the police providing security for the Winter Games here. On patrol, they often wear military-style jackets and high lambskin hats.

That video, not pleasant to watch, is below...