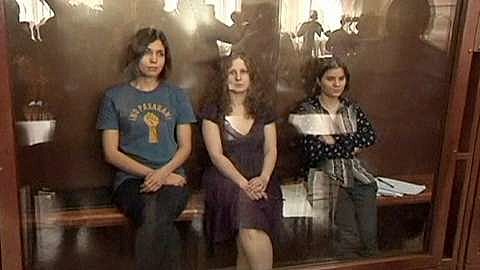 Three members of Russian punk band Pussy Riot have been convicted of hooliganism motivated by religious hatred, over a protest in a cathedral.

Judge Marina Syrova said the women had "crudely undermined social order" during their action in February.

The women say their "punk prayer" was a political act in protest against the Russian Orthodox Church leader's support of President Vladimir Putin.

"Tolokonnikova, Alyokhina and Samutsevich committed hooliganism - in other words, a grave violation of public order," she said.

The judge quoted prosecution witnesses as saying the act had been one of blasphemy, not politics. - [BBC]

Maybe not a surpise, given Russia's current sociopolitical climate, but is sure to spark further outrage for those who have been championing Pussy Riot's cause.

And the sentence:: Each band member is to receive two years in prison which begins from the day of the arrest. At least it wasn't the three years the prosecutor wanted.

The three young women committed a "serious crime" and "should be punished", says judge Marina Syrova, sentencing them to two years' jail at a corrective labour facility for "hooliganism" and "incitement to religious hatred".
In the courtroom, the verdict was greeted by cries of "Shame!" and "Injustice!" [Yahoo]

There are a bunch of protests and rallys happening today in NYC: a musical masquerade protest party outside Nicholas Orthodox Church is going as we speak; there's a march on Madison Ave at 11 AM; and a Times Square rally at 1 PM. Details on those events can be found here.

Last night, a reading of Pussy Riot's s moving courtroom statements happened at Liberty Hall. Did anyone go? Even though the verdict is in, the Pussy Riot story remains developing.