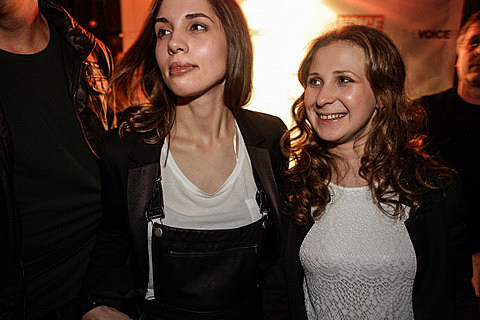 Pussy Riot members Nadezhda Tolokonnikova and Maria Alyokhina are suing the Russian government in the European Court of Human Rights over their 2012 arrest and imprisonment:

Maria Alyokhina and Nadezhda Tolokonnikova, who were given an amnesty in December after serving 21 months in prison and pre-trial confinement, are demanding €120,000 (£71,000) each in compensation, plus €10,000 in court fees. They argue that the investigation and prosecution violated their rights and amounted to torture.

"They didn't get fair trial here in Russia so they want to get it finally in the European court of human rights," said Pavel Chikov, the head of the human rights legal group Agora, which is representing the two women.

"Plus they want this case to set a precedent that Russians can speak publicly on sensitive political issues, even if this speech is not supported by majority. This is a case about freedom of expression and fair trial first of all." - [The Guardian]

Alyokhina and Tolokonnikova were released in December as part of a Russian amnesty.