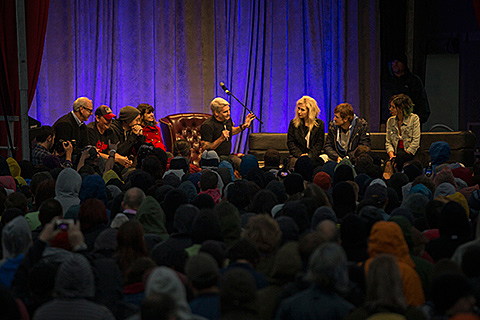 Pussy Riot have had an eventful year, and after making an appearance in NYC at Barclays Center in February, members Masha Alekhina, Nadya Tolokonnikova and Petya Verzilov will return for a conversation at MoMA PS1 on Sunday (11/2). The conversation is part of the venue's ongoing Sunday Sessions series, and is happening in conjuction with MoMA PS1's Zero Tolerance exhibition. The Pussy Riot members will "join MoMA PS1 Director Klaus Biesenbach in a discussion focused on the current culture of political oppression within some national and international governments and how it is being addressed by artists worldwide." The event goes from 4-6 PM. Tickets are on sale now.

We invite all guests to come dressed for a royal celebration of all things Queens:

That goes from 8 PM to midnight, and tickets are available. Afterwards, Susanne hosts a Haunted Warehouse After Party at 4-40 44th Drive in Long Island City which goes from midnight to 4 AM. Tickets for that are available too.