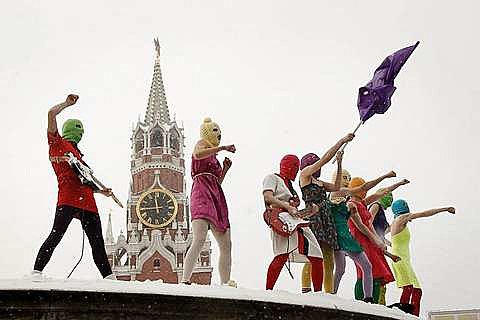 After Russian feminist punk band Pussy Riot were jailed for a performance this past February where they called on the Virgin Mary to "throw Putin out" and were charged with "hooliganism motivated by religious hatred or hostility," the band went on trial on Monday (7/30). Reuters reports:

Maria Alyokhina, 24, Nadezhda Tolokonnikova, 22, and Yekaterina Samutsevich, 29, were brought to Moscow's Khamovniki court for Russia's highest-profile trial since another opponent of Putin, former oil tycoon Mikhail Khodorkovsky, was convicted of embezzlement in 2010 in the same courtroom.

Supporters chanted "Girls, we're with you!" and "Victory!" as the women, each handcuffed by the wrist to a female officer, were escorted from a police van into the courthouse.

The group's members have consistently maintained that their protest was political and that they meant no harm to Christians.

"Our performance contained no aggression towards the public - only a desperate desire to change the situation in Russia for the better," she said. "We are not enemies of Christianity. The opinion of Orthodox believers is important to us and we want all of them to be on our side - on the side of anti-authoritarian civil activists."

The article also mentions that the band's defense lawyer, Nikolai Polozov, said, "The court is being very one-sided, slanted towards the prosecution, which of course in our view is motivated exclusively by political bias in this case."

Many benefits for Pussy Riot have gone on in NYC, and Change.org is now hosting a petition at their site. The petition states, "We support the right of artist to write and sing songs of protest and dissent" and "We demand the relase immedately of the PUSSY RIOT 3." Show your support.