Nadya and Masha at The Spotted Pig (more by Gretchen Robinette) 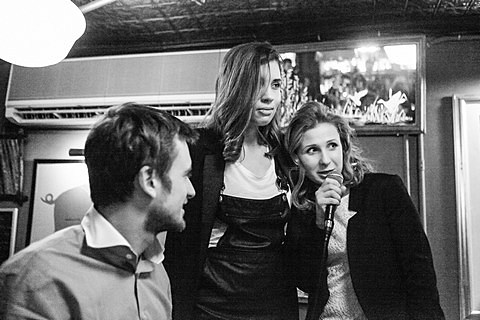 Masha Alyokhina and Nadya Tolokonnikov, who maybe aren't but maybe are still in Pussy Riot, recently returned to Russia (specifically, Sochi, where the Olympics are currently happening) after visiting NYC, and The Guardian reports that they've since been arrested by Russian police:

Nadezhda Tolokonnikova and Maria Alekhina said they had come to the Winter Olympics to hold a Pussy Riot performance, but were simply walking down the street when they were detained.

"We were just walking around Sochi when they grabbed us," said Tolokonnikova by telephone from a police station not far from the Olympic Park. "They told us we are suspected of theft. Of course there has been no theft."

...As of early afternoon, she had not yet been questioned, and said "nobody is telling us anything" about what will happen next.

"We are in Sochi in order to carry out a Pussy Riot action," wrote Tolokonnikova on Twitter shortly after the detention. "The song is called, 'Putin will teach you how to love the motherland'".

This is less than two months since they were initially freed.

UPDATE: BBC News has since reported that they've been released: "The two band members and three other women emerged from the police station in Sochi wearing their trademark ski masks after their brief detention."