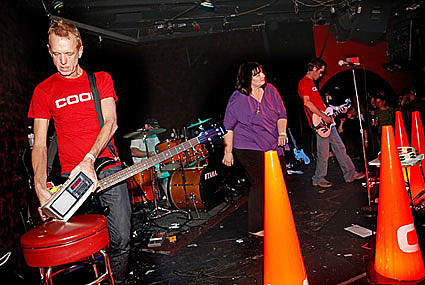 Oxford Collapse sent out this message about tonight's Brooklyn show...

Subject: we play with PYLON!

normally we're not all like, "come to our show" but this one is different, tomorrow, Thursday, Nov - 8, we play with one of our all time favorite bands, Athens GA's own PYLON! We're psyched to be sharing the stage with these sweet southern folks! It should be an all around awesome night, Free Blood is playing and Hugo from Gang of 4 is going to play records!

...Pylon may not have made an album since 1990's Chain, but it was apparent they've still got the chops. Drummer Curtis Crowe and bassist Michael Lachowski, in particular, don't seem to have missed in beat -- nothing sluggish or sloppy about their playing. And Randall Bewley's wiry guitar lines still sound fresh. In fact, Pylon felt more of the moment than nine-tenths of the bands who have been aping post punk sounds since it came back in fashion five years ago.... [Sound Bites]

Pylon also played Atlanta on November 1st (the picture above), Brooklyn tonight (see above also), and have one more scheduled show at World Cafe Live in Philadelphia on November 10th.

Before there was the "next Seattle" craze that led the music industry drooling in the direction of Chapel Hill, there was Athens, Ga. And before Athens' R.E.M. became a household acronym, there was R.E.M.'s favorite band, Pylon. [Independent Weekly]