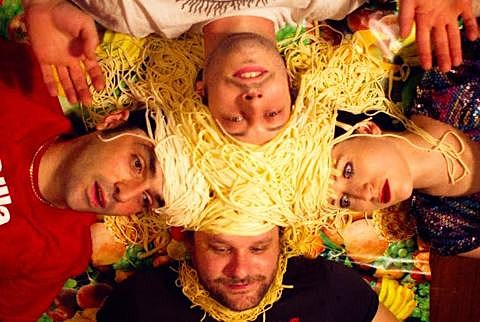 February will see the release of Pagan Day, the debut album from PyPy, a Montreal underground supergroup of sorts with Choyce of Red Mass/CPC Gangbangs and Annie-Claude of Duchess Says, plus other members of both those bands. The album veers like a drunk driver from wild, speed-fueled acid rock to ESG style grooves -- and it's pretty unlike either of PyPy's parent bands. You can stream three tracks from Pagan Day below.

I caught PyPy at M for Montreal 2012 and wrote this:

The band formed when Duchess Says and Red Mass shared rehearsal space and some of each decided to jam, the band features both wild-eyed redhead Annie-Claude and Red Mass' Choyce on vocals/guitar, neither of whom shy from the spotlight. No surprise, Annie-Claude dominated the proceedings but here she's in relatively restrained mode, meaning she's still going crazy but not totally in-your-face...a blast to watch

PyPy will be touring in February, mostly in Canada, but they'll be in NYC on February 28 at Cake Shop. Perhaps they'll add another show while here?

Dates and streams are below...