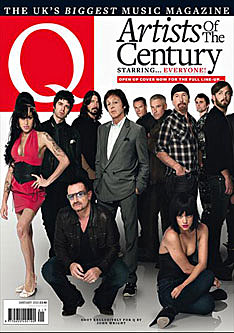 The December issue of Q Magazine is an 'Artists Of The Century' special edition, covering all of the acts that the fine staff of the good ship Q feel are the most important of the century so far. As befitting a special edition of the UK best selling music monthly requires a special cover was commissioned world renowned photographer John Wright has spent over a year shooting 34 artists to fit on triple fold out cover.