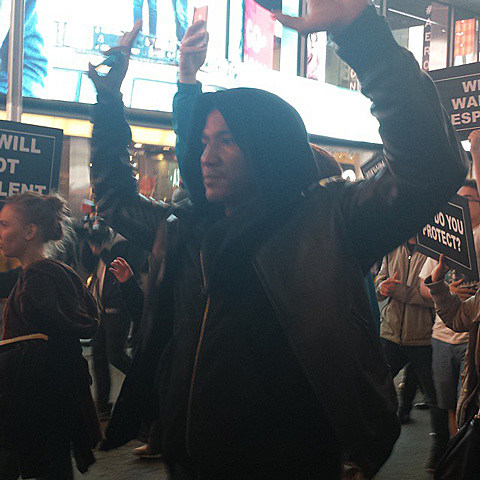 Last night it was announced that the grand jury decided not to indict Ferguson, MO police Officer Darren Wilson in the August shooting and death of 18-year-old Michael Brown. Protests sprung up all over the country. In NYC, Q-Tip lead protests in Times Square chanting "Whose streets? Our Streets!" and "Don't shoot! Hands Up!" Instagram videos of him in Times Square can be watched below.

Meanwhile, much much closer to the center of the story, Run the Jewels were performing in St. Louis, Missouri. Killer Mike, who sang about the police "terrorizing whoever, but mostly black boys" in his hyper-political song "Reagan," gave a moving, tearful speech during their set. "I knew it was coming...I knew it wasn't going to be good, but you motherfuckers got me today. You kicked me on my ass today, because I have a 20-year-old son, I have a 12-year-old son and I'm so afraid for them." You can watch it below.

Macklemore also took part in a protest in Ferguson, which Seattle King5 News has a clip of here.

Lots of other musicians expressed their feelings on social media. "I'm heartbroken over the news of no indictment in Ferguson. Let's all pray for peace," Pharrell Williams tweeted. Talib Kweli tweeted, "I feel really bad for the family of Mike Brown. To my brothers & sisters in Ferguson my heart is with you & I will join you soon."

Azealia Banks also went on a long Twitter rant about it, saying, "What makes it even worse is the fact that I sleep with white men..... LOL" and "I might have to kill one of these crackers in their sleep !!" but then "Lol, I'm joking." She also got more serious and said things like, "But something seriously has to be done about this shit. I don't want to hear about another unarmed black kid being shot by the damn cops. It's so discouraging, just as a young black person, to know that people like me can be murdered and have there be no real justice." Read many more of her tweets here.

Not every musician was against the ruling. Gun expert Ted Nugent tweeted, "DarrenWilson did good MichaelBrown did bad justice is served."

Video of Killer Mike's speech in St. Louis and Q-Tip in Times Square, below...

@qtiptheabstract leading #TimesSquare protesters in chants of "Whose streets? Our streets." #Ferguson