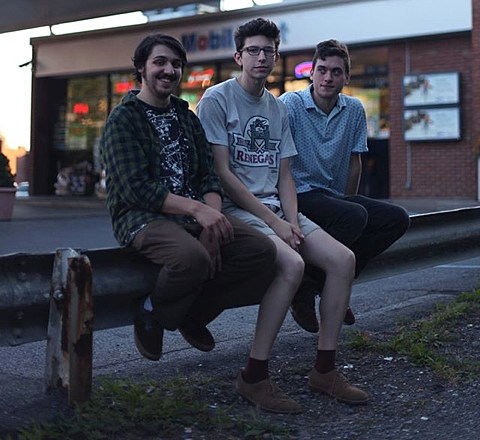 New Paltz trio Quarterbacks are releasing their self-titled followup to 2014's Quarterboy on February 10 via Team Love/Double Double Whammy. Two songs are out so far, including "Center" (one of The FADER's favorite songs of 2014), and both are punk-ish twee pop similar to Radiator Hospital, who will join them in Philly this weekend with Girlpool.

That Philly show is part of a short Northeast tour that includes the previously discussed Kingston, NY show with Joyce Manor and Laura Stevenson, as well as a NYC show on Tuesday (1/13) at Silent Barn with Long Beard, a solo set from Jake of Sitcom, and a solo set from Isabel of The Realbads. Doors are at 8 PM and $7 gets you in. All Quarterbacks dates are listed below.

If you're going to that Silent Barn show, it's worth showing up early to catch Isabel's set. The Realbads released their debut album, Here Come The Realbads, this past fall and it's the kind of DIY indie rock that fans of any other bands mentioned in this post should dig. You can stream that below.

In semi-related news, Quarterbacks' New Paltz neighbors Diet Cig (who share producer Christopher Daly with Quarterbacks) will release their debut EP, Over Easy, on February 24 via Father/Daughter Records. They also have some shows coming up this month, including a free one in NYC tonight (1/9) at Legion with Earl Boykins, Thick and PWR BTTM. All of their dates are listed, with a stream of "Scene Sick" from their EP, below.

Speaking of Father/Daughter Records, they're also releasing the new EP from Anomie, the solo project of Rachel Browne who you may know better as the singer of Field Mouse. It's a solo project, but it's not stripped down acoustic songs or anything. The first single, "So Long," is driving indie rock that's actually more rocking than most of the newest Field Mouse album. It's good stuff, as you can hear for yourself below. Michael Eisenstein of Letters to Cleo mixed the EP, and Kyle Gilbride of Swearin' (who mixed the Field Mouse album) mastered it.

Anomie doesn't have any dates at the moment, but you can catch Field Mouse on tour, including twice in NYC. First they play the 1/17 date of Dr. Dog's 8-night run, which begins tonight (most but not all nights are sold out), and then they play 3/28 at Le Poisson Rouge with Kevin Devine and Dads (tickets).

All mentioned song streams and lists of dates below...