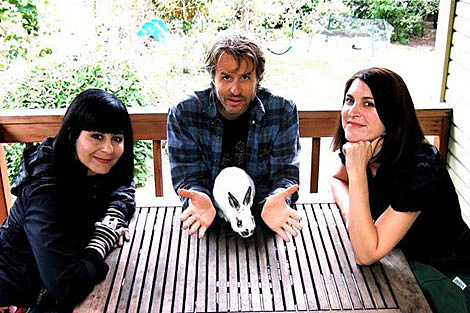 Portland trio Quasi has a new album, American Gong, coming out on Kill Rock Stars February 23rd. "Repulsion," off that, is a catchy, twisted piece of indie-rock gold. The band knows something about "indie-rock" having connections to Sleater-Kinney (drummer Janet Weiss was a member), Steven Malkmus and the Jicks (which feature Weiss and bassist Joanna Bolme) and Elliot Smith (Sam Coomes played in Heatmiser and Quasi, when they were a duo, backed Smith on several tours).

Their previous tour dates have been updated with many more stops that run from March to the beginning of May. They play Bowery Ballroom on Thursday, April 22nd. Tickets go on AmEx presale Wednesday, January 13th at noon. General sale starts Friday, January 15th at noon.

Elliott Smith was/is also a Kill Rock Stars artist and the label recently announced some news related to reissues and an unreleased track.

All Quasi tour dates and videos of the band (Quasi & Elliott Smith covering "Paint It Black"!) are below...

Quasi - All The Same (at Touch and GO 25th anniversary)