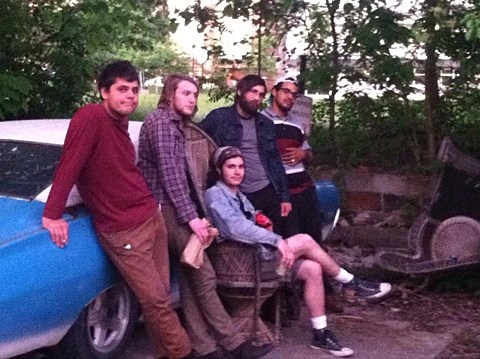 Philly's Queen Jesus is the band led by former Tigers Jaw drummer Pat Brier. He also currently drums in Three Man Cannon, and in Queen Jesus he's backed by other members of that band and Kite Party. You may recognize Pat's voice from the slowcore/shoegaze-inspired track on Tigers Jaw's Charmer, "I Envy Your Apathy," and that sort of slow sad stuff is what he makes in Queen Jesus too. QJ is a little more raw and reverby than Tigers Jaw though, sounding like the lo-fi introverts of '90s indie.

Queen Jesus will release their debut album, Darkness, Yeah, Yeah on September 23 via Stereophonodon and its new single, "Water From The Rock," premieres in this post. Check it out below.

Queen Jesus have a hometown show with Scott & Charlene's Wedding happening this month and then they'll kick off a tour with Philly's The Spirit of the Beehive (who just toured with Cayetana). That tour hits NYC on October 3 at The Flat with Field Guides.