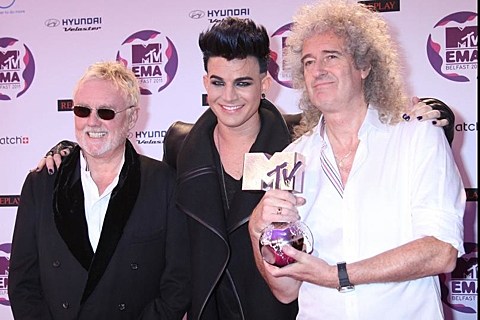 I think the thing that's really special is that this is the real deal. This is live. In today's music world, you go to a concert and you're getting a lot of playbacks. There's click tracks. It is what it is. I'm not hating on it. But this is the real deal. This is pure. We're not playing to a click. We're not playing to tracks. This is all live instruments. I'm singing all the vocals with these guys on vocals. It's purely organic. I think in today's day and age, it's very exciting for an audience to see something that has that much heart. [Adam Lambert to Rolling Stone]

Back in 2011, we asked What's the worst example of a band replacing their singer? around the time INXS, Journey, and "Sublime With Rome" were all touring. Giving all three of those a run for their money, American Idol season 8 runner up Adam Lambert will tour as the lead singer of Queen this year, in place of the late Freddie Mercury. He's performed with the band before but this will be their first full tour together. Can't wait.

The tour, which features original members Brian May and Roger Taylor (but not John Deacon), comes to NYC for a show on July 17 at Madison Square Garden. Tickets go on sale Friday, March 14.