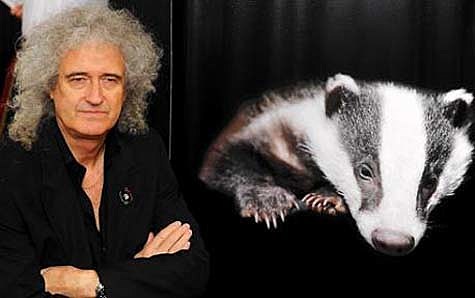 "Queen star Brian May has launched a new campaign against cattle farmers in a bid to save badgers from an "indefensible" cull.

Government officials are allowing farmers in West Gloucestershire to shoot badgers in a bid to slow the spread of bovine tuberculosis, which can kill off herds of cows.

Rocker-turned-animal rights activist May has teamed up with bosses at animal welfare charity RSPCA for the Save the Badger drive, in the hope of stopping the mass slaughter.

The guitarist claims the cull will make bovine TB rates worse as sick badgers will travel to other areas, thereby spreading infection even further.

He is urging fans to sign a petition and boycott dairy products made in the areas where badgers are being killed, insisting, "I would certainly not drink milk that comes at a price of badgers being slaughtered."

May adds, "This is a horrific proposal, truly horrific. Badgers have just as much right to live in this country as we do. They mind their own business. They do nobody any harm."" [WENN]

Go Brian! Save the badgers!