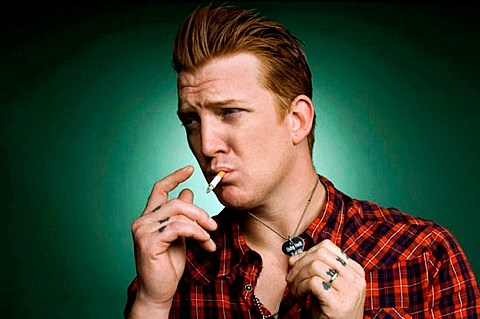 Desert rockers Queens of the Stone Age put out their new record, ...Like Clockwork, today (6/4) via Matador. It's their first album since 2007, their first with Dave Grohl, Nick Oliveri, and Mark Lanegan all together since Songs for the Deaf, and their first on an independent label since their debut. The record also features appearances from Alex Turner (Arctic Monkeys), Trent Reznor, Elton John, and others. And while the guest appearances aren't felt as strongly as ones on past albums, that doesn't hold the album back from being a very solid listen. Certain tracks (my personal favorite is "I Sat By The Ocean") rank among the band's best. A Spotify stream of the album and the video for "My God Is the Sun" are below.

In honor of the release, the band will be doing some celebrating in the NYC-area this week. First, on Wednesday (6/5), QOTSA will do a "Live On Letterman" concert, which will be taped in the Ed Sullivan Theater and air on CBS.com and VEVO at 9 PM that day.

The next day (6/6), they'll be doing an in-store at one of NJ's greatest record stores, Vintage Vinyl (you had to buy a record to get in and it "sold out" very quickly the day it was announced).

And finally, on Friday (6/7), they're doing a secret show in Brooklyn. We can't say much more than that, but if you click that link you'll see at least one record store is giving out 30 tickets (a number much lower than the capacity of the venue they're playing).

All dates are listed, along with that stream/video, below...