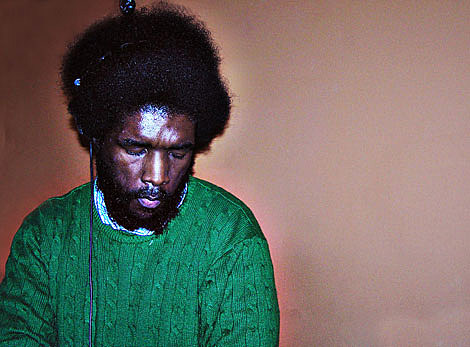 Friday night's celebrity telethon Hope for Haiti Now: A Global Benefit for Earthquake Relief has so far raised more than $57 million - a record for a disaster relief telethon, said the event's organizers.

In addition the star-studded Hope for Haiti Now album, featuring performances from the evening, is the biggest one-day album pre-order in iTunes history.

The charity event, spearheaded by George Clooney with the support of many of Hollywood's A-listers, featured two hours of musical performances and appeals for donations for earthquake relief. [People]

One of the performers in attendance was Questlove, who backed Mary J Blige and others during the broadcast. Last Thursday, Questlove kicked off a four-week Thursday night DJing residency at Brooklyn Bowl, with guest DJs Talib Kweli and Q-Tip to benefit Haiti. Tickets are on sale for the next three Thursdays (1/28, 2/4, 2/11) (which don't appear to be benefits).

Questlove and The Roots were set to headline Music Hall of Williamsburg's N. 6th for Haiti concert on Wedesday, January 27th. Also on that bill was Kaki King, Eric Krasno & Chapter 2 with John Scofield, very special guest Matisyahu and others, but... that show has been CANCELLED.

Not cancelled: The Haiti benefit happening at The Bell House on Wednesday night, and the fourth and final one at City Winery tonight (1/25). We also had a great one (with over $20,000 raised) at Music Hall of Williamsburg on Saturday.

Hopefully the current messy state of NBC late-night won't affect the Roots and Questlove and their regular stint on Late Night with Jimmy Fallon. Last week the show paired the Roots with Antibalas and the cast of Fela! (a show Questlove associate produced), which you can catch on Broadway. That video, clips from Friday's Haiti telethon and more Questlove videos are below...