Throwed - "Houston slang, for being wasted, high, or both" 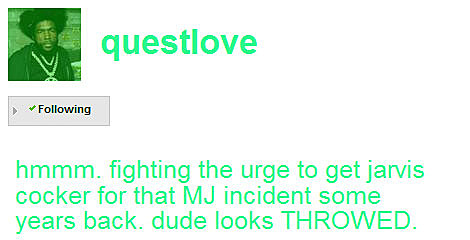 The above tweet comes to us from Questlove of the Roots live from Jarvis Cocker's Late Night with Jimmy Fallon taping. The episode will air tonight, after Jarvis is finished playing Music Hall of Williamsburg and around the time The Roots are playing Webster Hall. What is Questlove talking about? Video below...

Cocker invaded the stage at the 1996 BRIT Awards in a spur of the moment protest against Michael Jackson's performance. Jackson performed surrounded by children and a rabbi, while making 'Christ-like' poses and performing his then-recent hit, "Earth Song". Cocker and his friend Peter Mansell (a former Pulp member) performed an impromptu stage invasion in protest. In the ensuing confusion, as security attempted to eject Cocker from the stage, three child performers received minor injuries.

Cocker was later detained and interviewed by the police on suspicion of assault. He was subsequently released without charge. Opinions from the press on Cocker's actions were mixed. The March 2, 1996, edition of Melody Maker, for example, suggested Cocker should be knighted, and Cocker's friend Noel Gallagher, of Oasis fame claimed "Jarvis Cocker is a star and he should be given an MBE". Gallagher is also quoted as saying of Jackson's behaviour "For Michael Jackson to come over to this country after what's all gone on - and I think we all know what I'm talking about here - to dress in a white robe, right, thinking he's the Messiah - I mean who does he think he is? Me?"[1] However, other journalists and the organisers of the BRIT Awards were outraged by Cocker's behaviour. In response to the ensuing media scrutiny of the action, Cocker responded, "My actions were a form of protest at the way Michael Jackson sees himself as some kind of Christ-like figure with the power of healing... I just ran on the stage... I didn't make any contact with anyone as far as I recall."