Walter of Quicksand at Union Pool (more by Redboy) 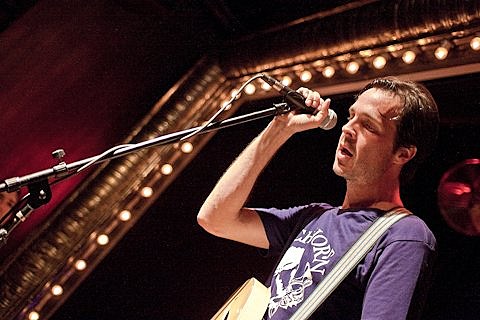 According to trusted sources, NYC post-hardcore greats Quicksand will return to NYC to play a "free or cheap" show at the end of this summer and will NOT play the discussed Revelation Anniversary shows in NYC as previously speculated and rumored (though those shows are happening with other bands). The yet-to-be-announced NYC date will take place in the days leading up to their already confirmed appearance at FYF in Los Angeles. The band feels the need to make their return in their hometown before making the trek to LA, to ensure that they can "give back" to the city they call home.

It's probably worth noting that FYF, who are hosting Quicksand in LA, are also the presenters of the House of Vans shows in NYC, and that House of Vans still has four TBA lineups to announce (nothing is confirmed at the moment though). (The first House of Vans 2012 show happens this week with the Rapture).

Quicksand, which contains all original members (Walter Schreifels, Tom Capone, Alan Cage and Sergio Vega) has changed their band status from inactive to active after they made their return at Revelation Records' 25th anniversary spectacular on the West Coast. So far no additional plans are known, but reportedly the show went well enough that the band is considering additional dates through the end of 2012, schedule permitting.

More on this story as it develops, but I've already blocked off the month of August as "busy."

Reminder, Sergio of Quicksand is currently serving as bassist for Deftones, who'll tour this summer and play the NYC area twice.