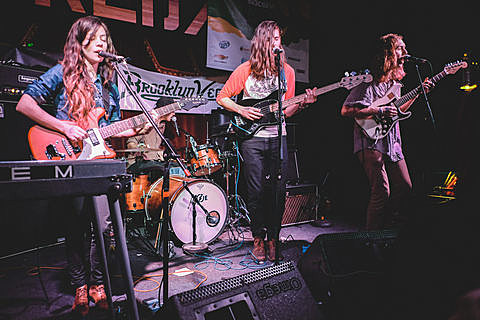 Quilt will be coming down from Boston to visit NYC this weekend to play Brooklyn Night Bazaar on Saturday (2/21) with The Mystery Lights, King Cyst, and Monograms on the bill as well. The band, who were last here to play one of the final Glasslands shows, don't have any other dates lined up -- perhaps we'll get some new songs. It's been almost a year since they released Held in Splendor (one of my favorites of 2014). They're terrific live, the rest of the lineup is good, and the show is free, so that's a great option if you're looking for something to do. RSVP to skip the line.

Tonight (2/20) at BKNB it's JD Samson will be performing live tonight as part of a a new group with her MEN bandmate Tami Hart, plus Lorna Dune and Aaron Harris. Other upcoming Night Bazaar shows of note: Word Inferno Friendship Society on March 7; Ex Cops, HEAT and more on March 13; Craft Spells,The Bilinda Butchers, Heavenly Beat and more on March 14; Teen Suicide, Amanda X, Lvl Up, Crying, Flagland and Washer on March 27; and Pity Sex and more TBA on April 17. All upcoming Brooklyn Night Bazaar shows are listed below....