Quintron in Austin in 2011 (more by Tim Griffin) 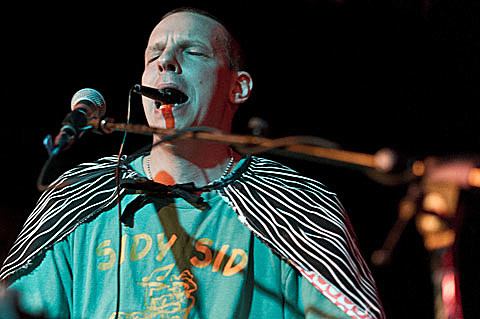 Avant rocker Quintron's Spellcaster II: Death In Space, intended as the followup to 1996's The Amazing Spellcaster, is out now on Pizza Burglar Records. You've already heard the rockin' single "Do The Raid" and now you can also stream the dronier "Death In Space" below.

As discussed, Quintron and his wife/collaborator Miss Pussycat are on tour now, hitting NYC this weekend at Baby's All Right on Saturday (11/29). Since we last spoke, openers for that show have been revealed including the TVTOR-related Ice Balloons and Moondudes. Tickets for Baby's are still available.

Meanwhile, Nels Cline has other upcoming shows including one in NYC TONIGHT (11/25) at SubCulture. Tonight's show is with avant-jazz guitarist Julian Nage, who Nels released the collaborative album Room with this week. Tickets for tonight's show are on sale. Stream a couple of Nels and Julian's collaborations below.

Nels also plays Trans-Pecos on December 18 with his Ring Nebula Project. Also on that bill is Ava Mendoza's Unnatural Ways, Cactus Truck and Cloud Becomes Your Hand. Tickets for that one are available. After that, Nels and Julian Nage head out on a proper tour together. All dates are listed below.

Meanwhile, Steve Shelley drums on the new Sun Kil Moon single "The Possum" which will be released December 1 via Caldo Verde and can be streamed below. Steve was also on SKM's 2014 album Benji. He'll also soon be back on the road backing his former Sonic Youth bandmate Thurston Moore on his tour that hits NYC on December 11 at the Marlin Room at Webster Hall (free with RSVP).

All dates and streams for Quintron and Nels Cline, and the Sun Kil Moon stream, below...

Quintron - "Do The Raid"