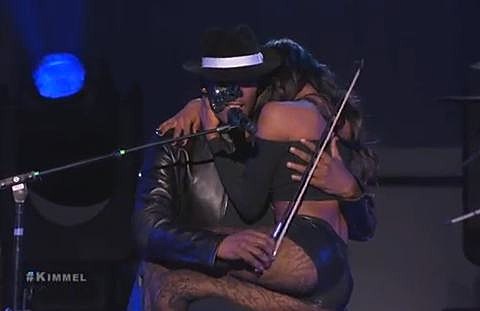 R. Kelly drops his Black Panties album next week (12/10) and has been a flurry activity, stopping by late night talk shows this week for some very weird, very R. Kelly moments. His appearance on Jimmy Kimmel Live on Wednesday (12/4) featured him singing a medley of songs while he literally played a woman like a violin with an appearance from 2 Chainz, then British actor Benedict Cumberbatch (aka Sherlock or Khan) gave a dramatic reading of the lyrics to "Genius."

Then last night (12/5) on Arsenio, he performed his Nelson Mandela tribute, "Soldier's Heart," and then performed "Shut Up" and made up songs based on the audience questions. You can watch the Arsenio and Kimmel performances below.

Meanwhile, the news we've all been waiting for. There will be more episodes of "Trapped in the Closet" coming in 2014 that will air on IFC. No specifics on those yet, but you can play catch-up on his labyrinthine musical soap opera on Saturday (12/7) as IFC will air all 33 episodes starting at 5:15 PM, or you can watch them all online now.

R. Kelly Performs Medley of "Genius", "My Story" feat 2 Chainz and "You Deserve Better" on Kimmel