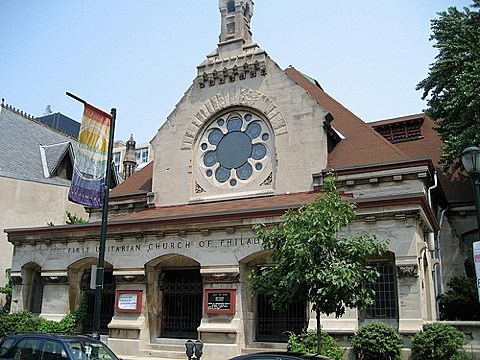 Some unfortunate news for concertgoers in Philly today. R5 Productions have announced that the shows they've been doing at First Unitarian Church since 1996 will be coming to an end ("kind of"). Here's what they say:

Hellos - We have some sad news to pass along. As you likely know, we (r5) have booked thousands of shows at The First Unitarian Church since 1996. A bunch of now super famous and legendary bands got their first "big break" there.... Arcade Fire, Mumford & Sons, At The Drive In, TV On The Radio, the xx etc. Even Ryan Gosling came through to play at the now infamous venue.

In the last few years, we have been fortunate enough to open two dedicated venues, Union Transfer and Boot & Saddle. With these new venues and a slew of other that have opened up around Philadelphia, it's become increasingly difficult to book bands who want to play the church. The church heavily relied on our rental income for the basement hall and since we were no longer using the space as frequently as we have in the past, they understandably had to find a more permanent tenant.

In a few weeks an after school group will begin to use the basement hall which will make our ability to host shows on weeknights extremely difficult. We still plan/hope to do shows on Saturdays and Sundays moving forward. We realize that limiting ourselves to just two days, there won't be many opportunities to present future shows in our favorite venue.

So over the next few weeks, this will be our last big series of shows at the church. We'll still have a show or two here or there but this is essentially the last big run. Take a quick look below for our remaining church shows in 2014. We encourage you to come out to a show, especially now that fall has arrived and it's the perfect church show going weather (aside from those gross ginkgo smell balls - we certainly wont miss those).

The church has been and continues to be an amazing partner to work with for almost twenty years. What other church would ever let a group called Pig Destroyer play a five days before Christmas? We are forever in debt to them.

One last thing, this does NOT include the seated shows in The Sanctuary or smaller Side Chapel. Those will continue to happen as normal.

Hope to see you out at the church at some point this year.
xo/r5

They say there will still be occasional shows in 2015, but these last 2014 shows are their "last 'hurrah' so to speak." Tons of good shows are coming up this year too, including YACHT / White Fang, King Tuff / Cassie Ramone, Iceage / Helm, Merchandise, Boysetsfire, David Bazan, The Dismemberment Plan / Priests, Restorations / Cayetana / Three Man Cannon / Hurry, Pig Destroyer and more. Tickets are available at R5's site.