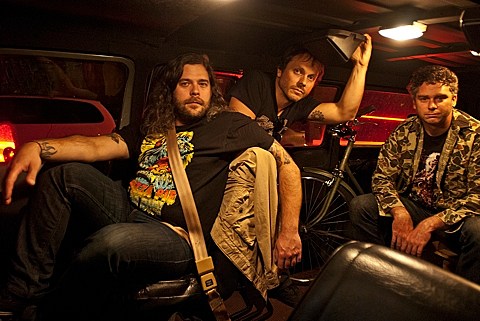 When we last heard from Portland's noise/sludge slingers Rabbits, they had recently released a split 7" with Arabrot, who have since gone on to release both an LP and an EP.

Keeping pace with Arabrot's release schedule is a fool's errand, but Rabbits have done a bit to catch up with SOS (Singles, Other Shit), an odds-and-ends compilation that pairs six unreleased originals with a block of eight '80s-era hardcore punk covers. One of those originals, "No (More) Depth," now has a music video, which we're streaming below.

The tune itself is over almost before it begins -- it's a minute-long spurt of flutter-strummed chords and spasmodic rhythms, but its lyrics are the selling point for me. Not many songs reference both the seventy-year-old folk standard "Sixteen Tons" and the Ramones in barely a breath: "What do you get when you beat on the brat? / Another day older and deeper in debt".

SOS is out now on Eolian Empire via download and cassette. Rabbits have some more releases in the works, too: a(nother) covers-oriented 7" split with an as-yet-unnamed East Coast band, and a 12" EP that should be out some time early next year. They're also gradually uploading archival live recordings to their Bandcamp, one show at a time.

Stream the video and some of the live material below...