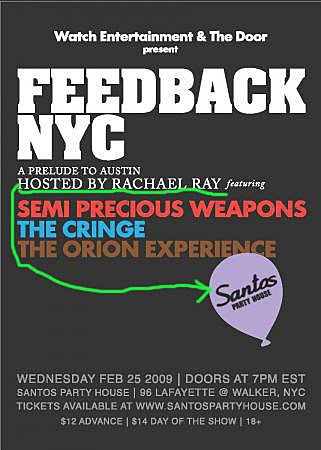 "One year after she set the blogosphere on its collective ear by invading the indier-than-thou confines of South by Southwest with her own party -- and then shocking everyone when that party actually turned out to be pretty good -- Rachael Ray is at again, with plans for another SXSW soiree.

While details are still limited, a source close to the event told MTV News that Ray is looking to throw an "expanded" party at this year's South By, tentatively scheduled for the afternoon of Saturday, March 21. Last year's party was held at Austin, Texas' Beauty Bar, but no location has been determined for this year's event.

The source said that "10 to 12" bands could be booked for Ray's SXSW party (last year's bill featured the Raveonettes, Holy Fuck and the Cringe, the band fronted by her husband, Jon Cusimano), and while not all the acts have been confirmed, we hear that a couple of fairly huge names -- the Hold Steady and the Airborne Toxic Event -- have already committed to play.

The source also added that another "big name" will be added in the coming days.

Ray will work out all the kinks at a SXSW pre-party, scheduled for February 25 at Andrew WK's NYC spot Santo's Party House. Semi-Precious Weapons, the Orion Experience and the Cringe top the bill." [MTV]

Tickets for the Santos show are on sale.

Last year it wasn't only Rachael that "set the blogosphere on its collective ear". It was Perez Hilton's entrance into SXSW too. His party ended up having Robyn, N.E.R.D., Riskay and others. Then he did a CMJ party too which Semi Precious Weapons also played (along with Sharon Jones and Lady Gaga).