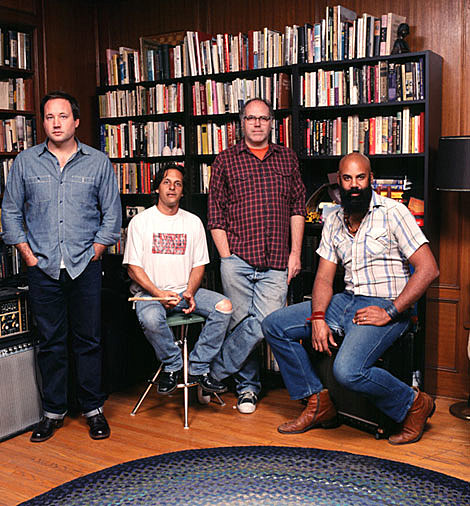 The Radar Bros. are a slowcore indie rock outfit out of Los Angeles, CA consisting of Jim Putnam (vocals, guitar, keyboard), Jeff Palmer (guitar), Steve Goodfriend (drums) and Senon Williams (bass). Jim Putnam is the son of Bill Putnam, founder of Universal Audio and widely considered to be the father of modern music recording. He founded both Universal Recordings and United Western Recorders. Jim was a former guitarist and frontman for Medicine before starting the Radar Bros. and currently has a side project called Mt. Wilson Repeater. [The dude with the massive beard] Senon Williams also plays in Dengue Fever. [Wikipedia]

The MP3 up there is off the Radar Bros album, Auditorium, that Merge Records released all the way back on January 29th of this year. More recently, the band released the song "Baby Jesus" on the Amnesty International Christmas comp we posted about earlier today.

The West Coast band is now here on the East Coast as part of a tour that has them at Mercury Lounge in NYC tonight/Monday and at Union Hall in Brooklyn on Wednesday. All dates, and a video, below...