Radiator Hospital at 285 Kent in April (more by Amanda Hatfield) 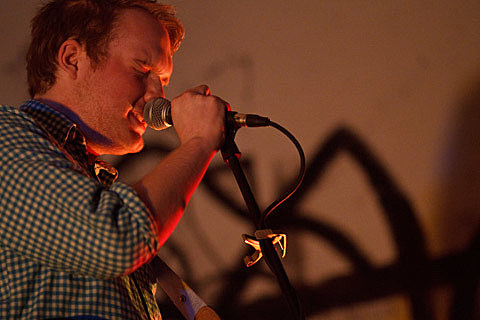 Northampton rockers Potty Mouth spend a good amount of time in NYC, having just played FADER Fort during CMJ, a 285 Kent show right before that, and countless others before that. They've just announced that they'll return for a show on January 6 at Glasslands, but this show is especially exciting because a band who's here less often, Philly's Radiator Hospital, is opening. Tickets for this excellent night of indie rock are on sale now. Their only other show together at the moment happens at SUNY Purchase this November. All dates are listed below.

In case you missed it, Radiator Hospital -- the project of former Waxahatchee bassist Sam Cook-Parrott, whose lineup also sometimes includes Swearin' members -- released his new album, Something Wild, earlier this year via Salinas. It's an excellent mix of scratchy pop punk and bedroom folk, and standout track "Our Song" is one of my personal favorite songs of its kind to come out recently. The album was followed by the Mall of America EP which, among other things, included a cover of Joni Mitchell's "Carey." Both the LP and the EP can be streamed in full below.

In related news, Radiator Hospital guitarist Cynthia Schemmer just formed a new band called Heavy Bangs. Their first offering, "All the Girls," is a similar type of lo-fi pop punk to Radiator Hospital and Swearin', and that can be streamed below.

All Potty Mouth dates are listed, along with all streams, below...

Heavy Bangs - "All the Girls"